May 17, 2012 Categories Elyse, Family, The Emotional State of Things 1 Comment

“On April 4, 1980, my 19-month run as an only child came to an end when my parents brought my new baby sister, Christine, home from the hospital. Although I don’t remember that day, I have been told many times that as soon as baby Christine was put down for a nap, I threw a ball in the bassinet and waited for it to be returned. It would take many months for baby Chrissy to throw that ball back to me, but in the meantime, I kept myself entertained with my new sibling by feeding her my own baby puree concoctions, which she gladly ate, and teaching her the ropes of being a little sister.

Since we were so close in age, we were the perfect little playmates. But, as we grew up, Chrissy and I began to realize that we were as different as a blonde and brunette with blond highlights could be. We fought over everything from boys to clothes (which Chris would borrow from me without my permission and then return to my closet unwashed) to our parents’ attention. It wasn’t until I went away to college and moved out of the house, that we began to truly appreciate one another’s differences,
something that still holds true to this day.”

Above is the first half of the toast that I wrote for my sister’s wedding this past September. After many months of imagining what I’d say on that oh-so-important day, I finally sat down at my computer the night before her nuptials to put the toast together. I’m not sure why I procrastinated when it came to completing such an important task. Part of me knows it’s because I was just so swamped with other things during her nine-month long engagement. The other part of me suspects it’s because it took until the wee hours of the morning of September 17, 2011 to put into words the feelings that had been residing within me for so long. It was important for me to get just the right message across; I wanted to convey my love for my little sister, some relevant sibling history and a light-hearted joke or two. In the end, I was happy with the finished product and even managed to get a few laughs as I delivered my speech, minus a toasting glass (yeah for being a preggo Matron of Honor), to my sister and her new husband’s 150 guests.

Most people who know my sister and I are aware of the fact that, although we may share some physical traits, the similarities pretty much end there. To say that we are as different as night and day would be an understatement. From tastes in food to favorite activities to parenting styles, we each take up our post at either end of almost every spectrum. However, we do have one very unique thing in common at this very moment: We are both parenting a newborn (or infant as is in my case). My sister gave birth to her second son, Ryder, eight weeks to the day that we welcomed Elyse into the world. Her due date was a mere five weeks out from my own, but because I delivered Elyse three and a half weeks early, Ryder and her cousin are just about two months apart. So right now, we are both going through the very tumultuous motions of the first few months of a new baby’s life. Lately I’ve been struggling with one of the more common feelings that accompanies early infancy — an intense feeling of isolation. Because I’m nursing Elyse, I try not to stray too far from home for too long, with or without her in my company. Also, since I’ve been so consumed with caring for a baby and a toddler, I haven’t been as available to answer emails and phone calls from friends. Finally, Taylor has been so busy with work, projects around the house and helping me care for the girls that we haven’t had a lot of time to connect as a couple. Hence, I’m really looking forward to summer when Elyse’s tummy will be a bit bigger and the warm weather will force me to leave the confines of the house.

So, here I’ve been so consumed with my own feelings of isolation for the past month or so that I completely forgot my sister just had a baby as well. Duh. It wasn’t until this past Wednesday when she brought Brody and Ryder over for a visit that I realized, “Hey, I’m really not in this by myself.” It felt wonderful venting my feelings regarding all of my current challenges to my sister. She listened intently and gave me the feedback I needed to hear to know that I was justified in my feelings. And as we both sat in the living room nursing our new babies, for the first time in a very long time, I felt the sisterly bond that once united us against the rest of the world. She was my first friend, my first confidant and my first adversary. As we grew from children to teenagers, ignited by our own passions, we took separate paths. Once we became adults, we reunited under the guise of common interests. But it wasn’t until yesterday that I truly felt connected, not just because of shared DNA, but because we are sharing one of the most extraordinary experiences known to man — motherhood. 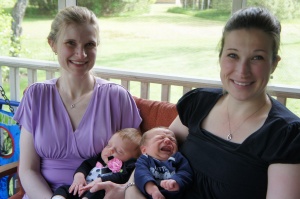 Chris, Ryder, Elyse and I on Mother’s Day.

One thought on “When Worlds Collide”